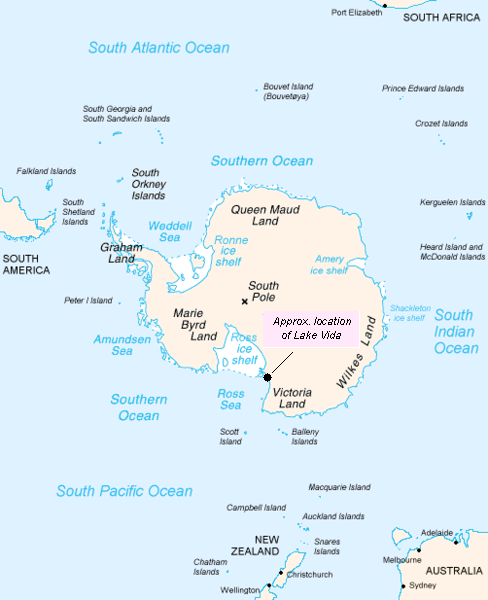 Lake Vida is a 5-km-long ice-sealed super-concentrated saltwater lake found under 19 m of ice in the region of Antarctica known as McMurdo Dry Valleys. Discovery of the all-year-round liquid nature of the lake was announced in December 2002 together with that of 2,800-year-old microbes, which had been revitalized after extraction from ice core samples above the lake. The water remains liquid because it is seven times saltier than seawater and so will not freeze even at –13&#176C – the temperature below the ice cover.

In 2012, it was reported that a number of previously unknown species of bacteria had been found living in the highly saline water.

Because the body of water has been isolated for thousands of years, it represents a previously unknown type of ecosystem and serves as an important natural laboratory for researchers interested in looking for evidence of microbial life on other worlds, including Mars, and sub-ice oceans on Europa and other moons of the outer solar system. Conceivably, a Lake Vida-type ecosystem served as the final niche for life on Mars before the surface water froze solid.

Research at Lake Vida could help scientists find out more about possible life in Lake Vostok, the largest of over 70 sub-glacial lakes in Antarctica, which lies more than 4 kilometers beneath the East Antarctic Ice Sheet, and Lake Ellsworth, 3 km down, and into which drilling will take place in the near future.