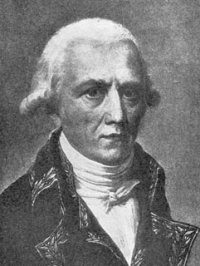 Jean Baptiste Lamarck was a French naturalist and pre-Darwinian evolutionist. He served in the French army, developed an interest in botany, and became a keeper of the Royal Gardens (1774) and, later, Professor of Invertebrate Zoology at the Museum of Natural History, Paris (1793). In his Philosophie zoologique (1809), he proposed that the environment causes organisms to acquire small changes which are then passed on to their descendants.

Lamarck is remembered as the first person to put forward a complete theory of organic evolution. But this really does little justice to him. Most of his long life was devoted to studies in natural history and he emerged as one of the greatest biologists of his age.

Lamarck was born in a Picardy village. He obtained some early education at a college in Amiens but by 17 he was distinguishing himself for valor in the French army. The return to peace in 1762 left Lamarck restless. His temperament wasn't suited to tedious barrack room duties. He resigned his commission and took up the study of medicine. Supporting himself by working in a bank, he qualified after 4 years.

But now, instead of practicing his acquired knowledge, Lamarck threw himself into the study of botany. Plants he had always loved and, equipped with a scientific training, he became keeper of the Herbarium of the Royal Gardens. Ten years of hard work ended in the publication of his Flore Francaise – a description of wild plants in France. The book incorporated a key for plant identification which Lamarck had devised himself. A further 15 years of botanical work saw Lamarck, at nearly 50, a leading French botanist. But the really illustrious part of his career was yet to come. In 1793 he was appointed Professor of Zoology at the Paris Museum with special interests in insects, worms, and microscopic animals.

Lamarck's small quota of zoological knowledge did not prevent him from pursuing his new course with all the enthusiasm he devoted to botany. His findings were to revolutionize the systematics – the classification – of the animal kingdom. First Lamarck divided the kingdom into what he called the vertebrates and the invertebrates– now very familiar terms. Then after long hours of dissecting in his laboratory he suggested new invertebrate groups – based on an anatomical likeness and dissimilarities, not merely appearances. The group Vermes recognized by Linnaeus, was demolished. Lamarck showing how completely different animals had been wrongly classified together. New groups were made, Lamarck naming the annelida, the arachnida, the tunicata, and the crustacea. Incidentally, it was Lamarck himself who coined the word biology.

From the study of modern invertebrates, Lamarck became interested in comparing them with the remains of past invertebrates. From the Tertiary muds and sands of the Paris basin, he collected a variety of fossils, chiefly mollusc shells. In his writings he encouraged other workers to similarly compare past with present forms. He drew biology closer together with paleontology and, in fact, has been called the founder of invertebrate paleontology. In other branches of geology, Lamarck showed a complete mastery of fundamental principles – as is shown in yet another study, his World Hydrology.

A man of Lamarck's versatility could not remain unaware of a possible relationship between different forms of life and methods by which one type of animal could change or evolve into another. Stimulated by earlier attempts of Buffon, he presented his won theory of evolution – the Lamarkian Theory. Seeing how closely structures of different organisms were related to modes of life, he stressed the importance of the surroundings – the environment. Two laws were made. First, that organs continuously used in response to the environment were strengthened, and those not used disappeared. Second, when these modifications have been acquired, they are passed on by reproduction. This second law – the inheritance of acquired characteristics – met with violent opposition. Certainly there are few if any proven cases of such inheritance. Yet whether right or wrong, this does not invalidate Lamarck's emphasis on the influence of environment. The same emphasis appeared in 1859 when Darwin proposed his Theory of Evolution by Natural Selection. Lamarck's monumental career ended in poverty, and, perhaps due to overwork with lens and microscope, in blindness.