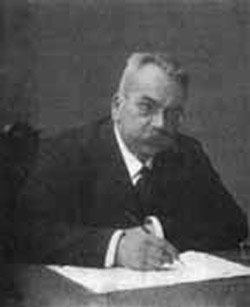 Kurd Lasswitz was a German philosopher and historian who has been called the father of German science fiction for his 1897 novel Auf zwei Planeten (On Two Planets),1 describing an encounter between humankind and an older, more advanced race of Martians. Lasswitz, like his English contemporary H. G. Wells, who published The War of the Worlds in the same year, adopts a Kantian evolutionary view of the solar system in which Mars is a more ancient world than the Earth and its inhabitants technologically superior. But whereas Wells portrays his Martians as anatomically alien and morally degenerate, Lasswitz presents a much less threatening picture of humanoid creatures who have progressed as far in their societal and ethical development as they have in their science and engineering. There is no blitzkrieg here by stalking tripods and deadly heat rays, no suggestion that biological evolution must inevitably create intellects that are as cold as they are huge. Yet when Lasswitz's Martians place the Earth under a benign protectorate, humanity rebels and the extraterrestrials withdraw. Thereafter, communication is restricted to interplanetary signals until the two civilizations achieve equality and the prospect of a Utopian future order.

In an article on extraterrestrial life written years later, Lasswitz wrote of his view that not only was it inconceivable that there were no other intelligence-bearing worlds in the Universe but that "there should necessarily even be infinite gradations of intelligent beings inhabiting such worlds." Moreover, he was optimistic that evolution of intelligence and of society went hand in hand and that we would have much to gain from contact with a superior race: "We do dream of a higher civilization, but we would also like to come to know it as something more than the hope for a distant future."