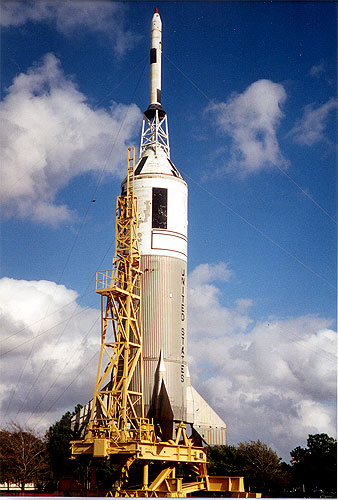 Little Joe was an American surface-to-air guided missile developed at the end of World War II in response to Japanese kamikaze attacks. Little Joes were also used for preliminary testing of the Mercury capsule in 1959–1960 and of the Apollo Launch Escape System and Command and Service Module structure, in 1963–1965.

A boiler-plate model of the Apollo spacecraft was placed atop the Little Joe to simulate a Saturn flight requiring an emergency separation of the spacecraft from the launch vehicle.

Tests were conducted to see if the system was capable of carrying the five-ton Apollo command module to safety during an emergency. The module was to then parachute back to Earth.

A variety of Little Joe configurations were used for the testing. As an example the third Little Joe was powered by two Algol motors and four smaller Recruit motors producing a total thrust of 340,000 lb. Weight of the total package at liftoff was 94,000 lb. The total height of the launch vehicle with payload was 95 feet.