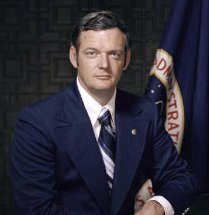 Glynn Lunney was a longtime NASA official who trained as an aeronautical engineer and came to the Lewis Research Center around the time of NASA's creation in 1958 to join the Space Task Group developing Project Mercury. He worked on the Apollo program in a number of positions including manager of the Apollo Spacecraft Program in 1973, and manager of the Apollo-Soyuz Test Project at the Johnson Space Center. Thereafter, he managed the development of the Space Shuttle and held several other NASA posts. Lunney retired from NASA in 1985 and became vice president and general manager of Houston Operations for Rockwell International's Space Systems Division.