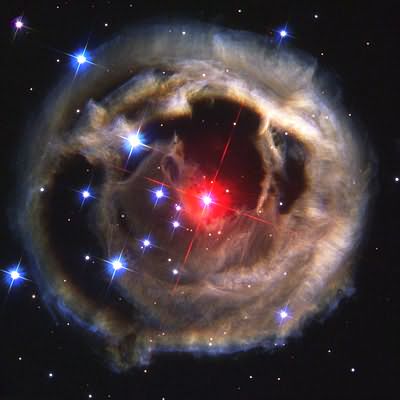 A light echo is the reflection of light from a primary source, such as a bright star, off another object such as a dust cloud or planet in its vicinity. Remarkable light echoes were seen, for example, from two sheets of dust near supernova 1987A.

The image shown here is of a light echo from dust surrounding the star V838 Monocerotis (V838 Mon), which lies about 20,000 light-years from Earth. In 2002, this star suddenly rose from obscurity to become briefly 600,000 times more luminous than the Sun. In the years since then the light from this abrupt outburst has traveled out illuminating progressively more remote regions of material that was previously expelled by V838 Mon. Astronomers have likened the data thus provided to a CAT-scan probe of the three-dimensional structure of shells of dust surrounding the aging star.