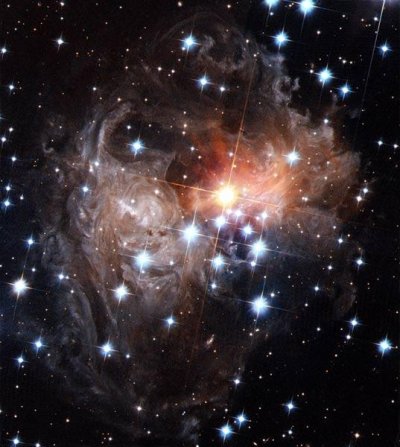 V838 Monocerotis is a curious variable star that lies in the constellation Monoceros at a distance of about 20,000 light years. When V838 Monocerotis brightened suddenly in January 2002, many astronomers thought it was a ordinary nova caused by the explosion of nuclear material on the surface of a white dwarf. However, ordinary novae brighten just once, whereas V838 Mon brightened and dimmed three times in the span of a few weeks. Furthermore, when astronomers were able to see the star clearly, it appeared to be very large and cool – not at all like a white dwarf.

Among the possibilities suggested was that V838 Mon a normal star that had collided with another star or swallowed three planets. The idea that no white dwarf was involved gained support from follow-up observations, reported in October 2006, which showed that V838 Mon is a member of a cluster of stars that is much too young for any to have reached the white dwarf stage.

Still, the collision or planet-swallowing scenarios are not easy to square with all that is known about V838 Mon. As the light from the outburst has travelled out into space, it has lit up material nearby, creating halo-like light echoes. These have revealed that a lot of material surrounds V838 Mon, which may have been thrown out by the star in previous outbursts. If correct, this would appear to rule out a collision with another star, which is a one-off event. It also makes the planet-swallowing hypothesis seem far-fetched. Not only would three planets be needed to make the three peaks seen in 2002, but more planets would have to have been engulfed by the star in the past to explain the pre-existing material.