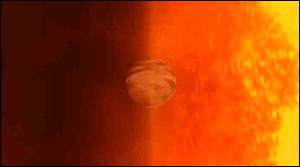 Artist's impression of a planet about to be destroyed as it plunges into its star.

Planet swallowing is the process by which planets are diverted on to collision courses with their central stars and end up being destroyed by them. Planet swallowing is likely to be fairly common during the early stages of a planetary system, when interplanetary collisions and close encounters are rife (see inward orbital migration).[1] It may also also happen much later when the central star swells to become a red giant and engulfs any worlds that happen to have been in close orbits. The devouring of a planetary midget, such as Mercury, would hardly alter a star at all. But with the discovery of many giant exoplanets in very small orbits, astronomers are beginning to realize that, in some cases, planetary swallowing might have a marked effect on stellar evolution. It could explain the unusual properties of many giant stars and some of the features of planetary nebulae.

Amazingly, a large planet could continue to orbit inside a red giant star for thousands of years, only gradually being vaporized as it spiraled down toward the core. Gravitational energy given up by the sinking planet could heat the star, causing it to puff off its outer layers as expanding shells of warm gas and dust glowing at infrared wavelengths. Although red giants normally rotate slowly, a rapidly orbiting devoured planet would boost the stellar spin rate and inject the star with a dose of heavy elements. If a brown dwarf were swallowed, it would have an even greater effect on a star and might even merge with the stellar core.

Some of the effects of the ingestion of a planet or brown dwarf, such as a high spin rate and elevated lithium abundance, could last for hundreds of thousands of years. Lithium doesn't normally survive long in a star, so its observed presence points to a recent ingestion. Many red giants have all of these telltale traits: fast spin, excess infrared emission, and unusually high lithium abundance. Between 4 and 8% of red giants show evidence of planet swallowing, in agreement with empirical estimates of how common planets are. The planet-swallowing hypothesis seems to be the best explanation for the origin of these lithium-rich giants.

It may also explain why many planetary nebulae are bipolar, with material ejected along a preferred axis. According to an older theory, a bipolar shape may arise when the nebula has another star as a close companion. The companion becomes enveloped in the main star's outer layers and spirals inward, dumping enough energy to eject these layers at about 20 km/s. This material stays in the plane of the companion's orbit to form a torus-shaped cloud around the main star. Later, when the star's core is exposed, its radiation drives the ejecta in the stellar wind at velocities up to 1,000 km/s. The wind blows in all directions, but because it is impeded by the slow-moving gas in the doughnut, it emerges perpendicularly as a bipolar outflow. The trouble with this theory is that only a few planetary nebulae seem to have both a white dwarf and a spiraled-in companion at their centers. However, this isn't a problem if the companion is a massive planet or brown dwarf because it could have completely dissipated or merged with the white dwarf.

In 2012, astronomers, using observations with the Hobby-Eberly telescope in Texas, published evidence that the red giant BD+48 740 had recently swallowed one of its planets.[2] Not does the star's spectrum show a high abundance of lithium which, as mentioned above, is a give-away sign of planet consumption, but another planet, still orbiting the star, has a highly elliptical orbit. An orbit such as this would not normally be expected around a mature star, and the best way to explain it is that the planet's course has been altered in the fairly recent past by the gravitational effect of a neighboring world as it plunged to its doom.