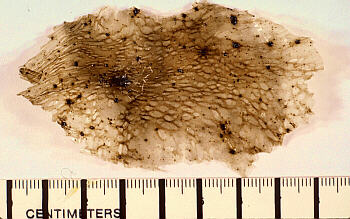 Limu, also known as Limu o Pele (Hawaiian for 'seaweed of Pele'), consists of thin flakes of basaltic glass that sometimes form when pahoehoe lava pours into the ocean. As waves wash atop exposed streams of lava, some water may become trapped and boil, resulting in delicate steam-filled bubbles of lava. Abrupt chilling and continued expansion of the delicate bubble walls form thin plates and shattered pieces of brownish-green to nearly-clear glass.

Limu has only recently been observed forming when pahoehoe flows entered the ocean during the current eruption of Kilauea Volcano. It had not previously been described as a tephra type.

The word, limu, was occasionally used in the 19th and early 20th centuries for reticulite, a type of basaltic pumice.