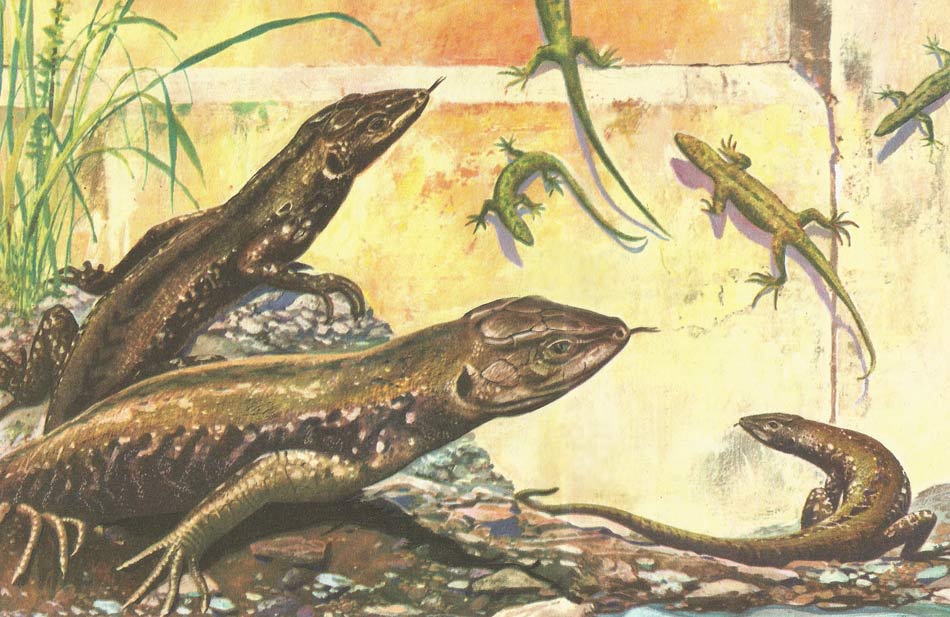 In the spring and summer wall lizards sun themselves on the warm stones. They are about 5 or 6 in long.

A lizard rubbing itself against a stone to free itself of its old skin. 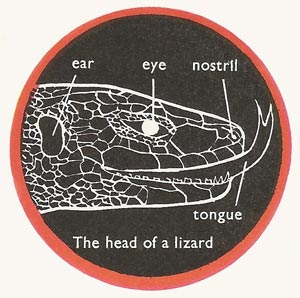 Head of a lizard. 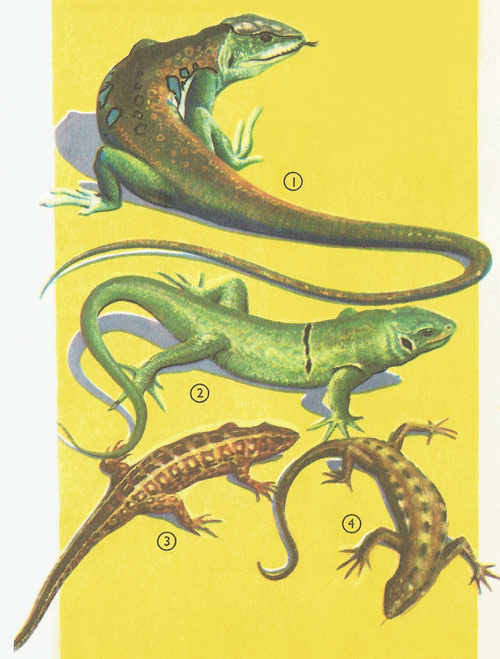 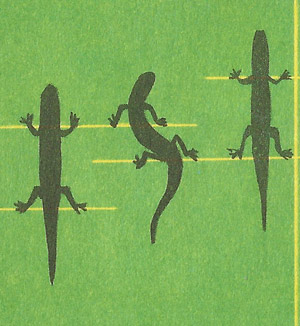 The lizard moves by undulating its body.

A lizard is any member of the suborder Lacertilia, which in turn belongs to the order Squamata of reptile. About 5,000 species of lizards are known and they are closely related to snakes.

There are only a few kinds of reptiles that live in Britain. There are three lizards and three snakes. The common or viviparous Lizard is the most hardy and wakes up from its winter hibernation earliest in the spring. it first appears on warm days in March, scuttling about on grassy banks, especially those which face south and are warmed by the low-slanting spring sun. It is colored brown and usually has a pattern of stripes or spots running along the body. Its skin is covered with scales, small on the body and larger on the head. The tail is long, the legs stout, and the toes long and slender; the total length of this lizard is six to seven inches. The tongue is forked, and the lizard constantly flicks it in and out of its mouth. It is called the viviparous lizard because, unlike most reptiles, its young are born alive, and not as eggs. They are born in Jul and Aug, six to twelve at a time.

On sandy heaths in England another kind of lizard may be seen in summer. This is the sand lizard. It is distinguished from the common lizard by having pale-centered dark spots on its back, and in the breeding season the males turn bright green. The sand lizard lays eggs, white and covered with parchment-like skin. These are laid in May or June and concealed in a hole in the ground.

The third lizard, the slow-worm, looks just like a snake, for it has no legs at all, though rudiments of them are present in the skeleton. It is greyish-brown, the females and the young being dark below and lighter above, and it is very smooth looking. This is another viviparous species, and its young are born in August and September.

The three British lizards are all carnivorous, feeding on any small creatures they can catch: insects caterpillars, spiders, and so on; the slow-worm feeds mainly on slugs and worms.

If a lizard is under threat, it will snap off its own tail. In the wild, this habit has a definite purpose. A lizard pursued by some other animal intent on eating it; it snaps off its tail and runs on, leaving behind the tail, which goes on moving and twitching for some time after it is broken off. There is a good chance that the enemy's attention will be diverted to the tail, and this enables its owner to escape. A new tail grows in place of the old one. This piece is usually lighter in color.

Lizards breed at two years old and are fully grown at four or five. It is believed that they may live for about ten years in the wild.

One of the commonest of these is the wall lizard. On some of the small islands of the Mediterranean, this species, breeding in isolation, has produced distinct subspecies. Here we have cases of a 'kind' of animal being wholly restricted to an area of only a few square miles.

The European green lizard (Lacerta viridis) is also found in the Channel Islands, and so has some claim to be called a British species.

A native of south-western Europe and the adjacent parts of Africa, this beautiful lizard is by far the largest European species. It may grow to a length of two feet.

This pretty, bright-green lizard ranges through Europe, reaching the Channel Isles. Reports of it in Britain are due to confusion with the green color of the male sand lizard at certain times of the year.

The less common of the two limbed British lizards, this is also found all over the central and southern Europe.

This is one of the hardiest of all reptiles; it is common in Scotland and is even found within the Arctic Circle and up to 9,000 or 10,000 ft in the Alps. Its viviparous habit is an adaptation to living in severe climates.

At first this new 'suit' is bright and shining, and in this way a zoologist can generally tell if a lizard has recently shed its skin.

British lizards all belong to species which rest their bellies on the ground and never stand up on their legs as a mammal does. The legs stick out on each side and push the body along, and progress is assisted by undulating or wriggling movements of the body.

Of course the slow-worm, since it does not have any legs, moves entirely by undulating movements, just as a snake does.


Lizards in other countries

There are many more kinds of reptile to be found in hot climates than there are in cold ones, and in the tropics lizards are found in great variety.

The geckoes are usually small lizards with flattened bodies and curious sticky pads on their toes which enable them to run easily on vertical and even overhanging surfaces. Some kinds make themselves at home in houses, and people living in tropical Asia soon get accustomed to seeing geckoes running about upside-down on the ceiling.

The monitor lizards are the giants of the tribe. Largest of them is the Komodo Monitor or 'Komodo dragon', which lives in the East Indies.

Perhaps the most extraordinary of all are the flying lizards of south-east Asia. In these the ribs extend outside the body and support a membrane of skin, rather as the ribs of an umbrella support its fabric. By spreading this apparatus out on each side the lizard is able to glide from one tree to another.