The green turtle (Chelonia mydas) ranges through tropical seas but the number of major breeding sites is small. In the Atlantic, Ascension Island (1) is used by turtles that feed on eelgrass and algae in warm shallow coastal waters off South America (2). By unknown means the turtles navigate (3) 2,200 km (1,375 miles) to Ascension in December. Courtship and mating (4) take place just off shore. Females may mate several times (5) but sperm can be stored for long periods and several clutches (insets) can be fertilized from one mating. The female leaves the water (6) at night. She lays hundreds of eggs in a season in Sandy pits (7). When the eggs are covered and camouflaged (8) she returns to the sea (9) and after the breeding season (10) returns to Brazil. After incubating for up to 10 weeks, eggs hatch (11) almost simultaneously. The baby turtles emerge together (12) at night and scramble toward the sea (13) guided by the lighter sky over it. They head for open water (14) and an unknown destination. 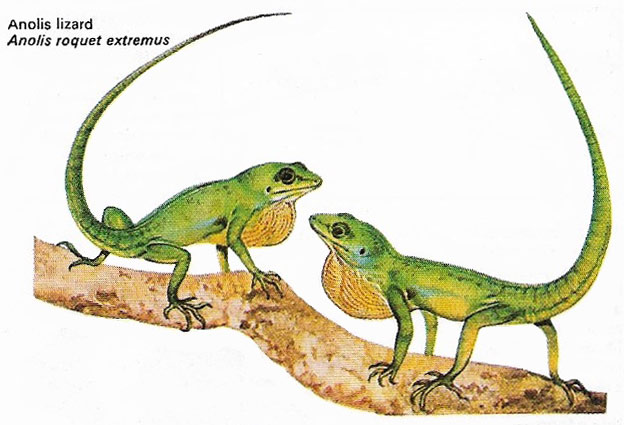 Fig 1. Anolis lizards display to each other by raising their bodies and tails and flashing brightly colored dewlap. This is an aggressive display between males. Other lizards display with flashing colors and by bowing. 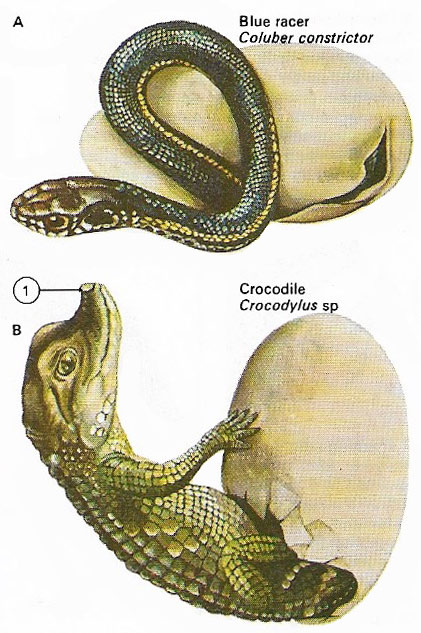 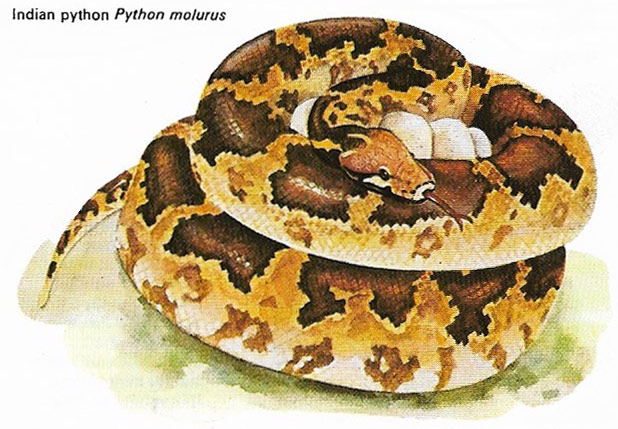 Fig 3. Parental care is shown by few reptiles. Some snakes, such as cobras and pythons, coils round their eggs, and female crocodiles and alligators sit over their nests. Because these animals are cold-blooded, they cannot keep the eggs warm, so the main effect of their presence is to deter potential predators. It there is some evidence to show that a brooding Indian python may produce heat by muscular contraction. Some lizards brood eggs too. The skink (Eumeces obsoletus) actually cleans and turns the eggs, helps the young to hatch and then grooms them for more than a week after hatching.

Fig 4. The longest reptile that was reliably recorded was a reticulated python of 10 m (32 ft). The anaconda I'd reputed to grow larger still but while it must be the heaviest species of snake the most acceptable record of its length is only 9 m (30 ft). The longest poisonous snake is the king cobra, at 5.5 m (18 ft). Several kinds of crocodiles may occasionally reach 6 m (20 ft). The giants among lizards are the Komodo dragons of Indonesia with lengths of up to 3 m (10 ft). Largest of the chelonians is the leatherback sea turtle, more than 2 m (6.5 ft) long and weighing more than half a tonne. Galapagos and Seychelles giant tortoises are the largest on land. The smallest lizards are New World geckos Spherodactylus sp which, excluding the tail, are only 1.8 cm (0.75 in) in length.

Fig 5. The tongues (1) of lizards and snakes convey particles to Jacobson's organ (2) where smells are detected. Originally part of the nose (3), the organ is now separated and well developed. 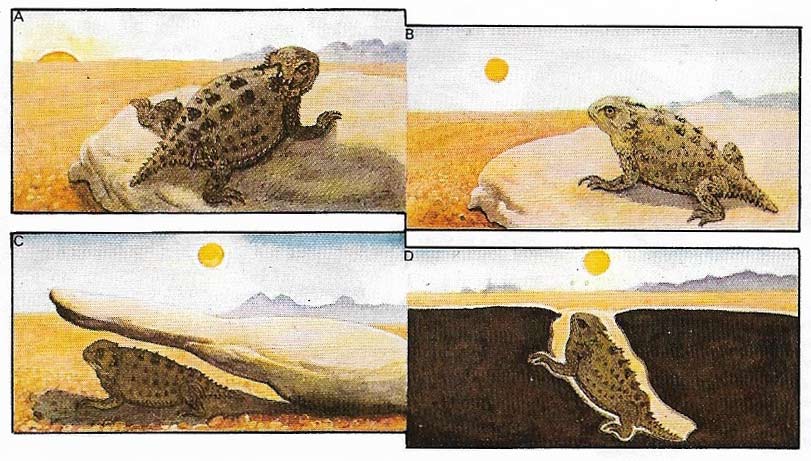 Fig 6. Reptiles may control body temperature by variations in behaviour, in the morning, when it needs to absorb heat, an agama lizard lies with flattened body on a sloping surface in order to absorb as much as possible (A). Later, when less heat is needed, it turns its head to the sun and presents a smaller surface to the rays (B). Finally, during the hottest part of the day, the lizard may seek shelter from the sun (C) or burrow into cooler soil (D). 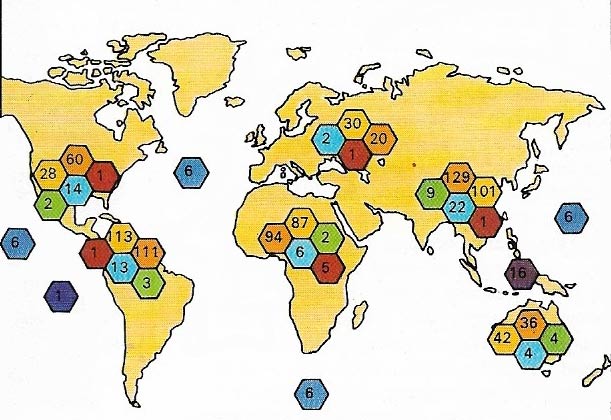 Fig 7. Tropical regions are the home of many reptile species. Numbers on the map refer to the genera present in each area. Although they come ashore to breed in particular areas, sea turtles are widely distributed throughout the warmer oceans. The only genus of marine lizard lives on the Galápagos Islands. Australasia, despite its size, has relatively few reptile genera.

There are about 6,000 species of reptiles living in the world today. They comprise about 25 species of crocodiles, 250 species of turtles and tortoises, 2,800 of snakes and 3,000 of lizards. Most reptiles live in the tropics (Fig 7), but a few hardy species, such as the common lizard, the adder and the greater snake, are found in the Arctic Circle, and one lizard lives in Tierra del Fuego.

Most reptiles cannot tolerate cold because of the way their body works. Reptiles are cold-blooded animals. This means that they have no built-in control over their body temperature and take on the temperature of their surroundings, to within a few degrees. Reptiles are most active when they are warm and they are best suited to tropical climates. Cold conditions make them sluggish and eventually kill them. But reptiles can control their temperature to some extent (Fig 6) by basking in the sun when cold and so raise their temperature even above that of the surrounding air. However, they are not able to maintain constant temperatures like mammals. Even with body temperatures as high as those of mammals they may produce energy only one-tenth as fast. Behavior which takes advantage of heat when available and avoids unnecessary cooling is important.

In the tropics, reptiles may avoid large fluctuations in body temperature, but far from the equator or at high altitudes it is not so easy. In northern Europe, low winter temperatures make life almost impossible, even for hardy reptiles, and they survive only by hibernating during the winter.

All reptiles reproduce by laying eggs. Crocodiles and pythons may lay up to 100 in a clutch, and turtles lay even more, but most lizards and snakes have smaller clutches. The eggshells are hard in tortoises and crocodiles, but in other species are usually leathery. The eggs are fertilized within the female before laying. All male reptiles, with the exception of the tuatara, have an intromittent organ – single in turtles, tortoises and crocodiles, double in lizards and snakes – which is turned outwards from the genital opening, the cloaca, for mating. Most reptiles have no family life and the eggs are abandoned after being laid, although they are often buried first. Warmth from the sun or decaying vegetation incubates them.

Some reptiles retain their eggs inside the oviducts until hatching, or even afterwards, so that the young are born alive – a condition known as ovoviviparity this process is particularly common in species that live in hostile surroundings, such as deserts or cold regions, and it has the advantage that the mother, by avoiding extremes, protects the devoting embryos fro them too.

Newly hatched reptiles are miniatures of their parents (Fig 2), ready to fend for themselves. Poisonous snakes can bite immediately after hatching. The rate at which reptiles grow depends on food and warmth. An alligator in suitable surroundings might grow an average of 2.5 cm (1 in) a month for the first years of its life and pythons might grow three times as fast as that. Reptiles grow quickly until sexual maturity, which is reached in less than a year by some small lizards but not until ten years or more by some tortoises and crocodiles. Unlike mammals, reptiles may still grow even when adult, although more slowly.

The sense organs of reptiles vary according to species. Crocodilians have reasonable eyesight, with the slit pupils characteristic of nocturnal animals, but cannot distinguish colours. Their hearing is good and their sense of smell is probably adequate. Turtles and tortoises have good vision and respond to colours; they also respond to scents, but their hearing is limited. Like many reptiles, the hear low notes best.

Lizards that are active during the day probably have the best reptile vision, seeing sharply in color, as would be expected from their use of color in display. Hearing is less acute, the animals responding, if at all, to the lower end of the sound scale. The exceptions seem to be the geckos, which have good hearing, and these and crocodiles are the only reptiles to produce much sound themselves. The sense of smell varies: it is poorly developed in tree lizards but good in many others.

Snakes have the oddest sense organs of all. They have an organ called Jacobson's organ (Fig 5), made up of two small cavities in the roof of the mouth, which is used in conjunction with the tongue. The organ is lined with sensitive cells and the twin cavities may explain why snakes and some lizards have forked tongue. Jacobson's organ helps a snakes sense of smell and many snakes can follow a trail by using it. Snakes also have unusual eyes. These are covered with a special transparent scale or spectacle, which replaces the two lids, and a sideways-moving nictitating membrane (third eyelid) which is normal reptile equipment. Snakes are color-blind and their eyesight is not as good as that of lizards. They lack the external eardrum that is present in other reptiles and, although they have internal ears, snakes are deaf to airborne sounds but often sensitive to ground vibrations.

Some snakes possess warmth detectors – sense organs that are unknown in other vertebrates. These take the form of large pits on the face of rattlesnakes and a series of smaller pits lined with sensitive cells round the lips of some pythons and boas.