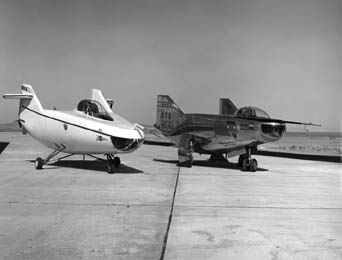 The M-2 was a series of experimental lifting bodies tested by NASA in the pre-Shuttle era. From 1966 to 1975, following the cancellation of the Dyna-Soar project, NASA built and tested three different lifting body designs: the M-2, HL-10 and X-24. The resulting data on aerodynamic performance during reentry was crucial for the design of the Space Shuttle Orbiter.

After 16 flights, the M2-F2 was involved in a crash, on May 10, 1967, from which NASA test pilot Bruce Peterson was lucky to escape with his life. This dramatic accident has been replayed many times on television as the opening sequence to The Six Million Dollar Man. The vehicle was repaired in the wake of the crash, a center tail fin added to improve stability, and the modified craft, renamed the M2-F3, used to carry out a further 27 flights in 1967–1972.