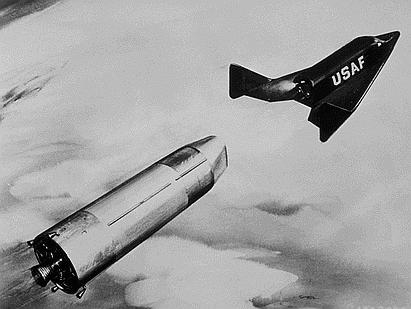 Artist's conception of Dyna-Soar separating from its Titan upper stage. 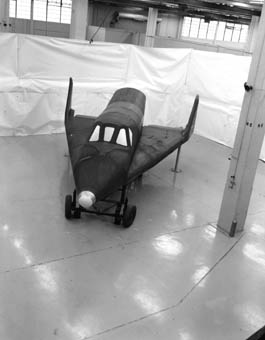 Dyna-Soar was an early American design for a manned space plane. The research program for Dyna-Soar was authorized by the United States Air Force a week after the launch of Sputnik 1 in October 1957. It resulted in plans for a military spacecraft that would be launched on a Titan III and then rendezvous with enemy satellites to inspect and possibly destroy them.

The perceived threat from the Soviet Union, spurred the US Air Force to look at a vehicle capable of hypersonic flight as a means to regain the military upperhand.

Having studied the work of Sanger, hypersonic specialists knew of his ideas for skipping entry as a way to extend the range of a suborbital aircraft. The Air Force described this maneuver as "dynamic soaring." The craft that would do this acquired the name Dyna-Soar. By early 1958, this idea was being looked into seriously by a number of aeronautical contractors with the clear understanding that the Air Force intended to request proposals and build a flying prototype. In June 1958, the Air Force narrowed the competition to two contenders: Boeing and a joint Bell Aircraft and Martin Co. team.

In April 1959, the Defense Director of Research and Engineering, Herbert York made a clear statement of the program's objectives. Its primary goal would involve hypersonic flight up to a speed of 15,000 mph, which would fall short of orbital velocity. The vehicle would be piloted, maneuverable, and capable of landing at a preselected base.

In November 1959, the contract award went to Boeing. In Apr 1960, the Aerospace Vehicles Panel of the Air Force Scientific Advisory Board gave Dyna-Soar a go-ahead by approving Boeing's design concept, with minor changes.

During the next three and a half years, the Dyna-Soar program went forward as its managers reached for higher performance. The 1960 plan called for the use of a Titan I as the launch vehicle. Because the Titan II lacked the power to put it in orbit, the Dyna-Soar would fly suborbital missions only. Over the next year and a half, however, the choice of booster changed to the Titan II and then the powerful Titan III-C. A new plan, approved in Deemberc 1961, dropped suborbital flights and called for "the early attainment of orbital flight, with the Titan III booster."

This plan called initially for single-orbit missions that would not require the craft to carry an onboard retro-rocket for descent from orbit. Instead the booster, launched from Cape Canaveral, would place the craft on a trajectory that would re-enter the atmosphere over Australia. It then would cross the Pacific in a hypersonic glide, to land at Edwards Air Force Base. In May 1962, the plan broadened anew to include multi-orbit flights. Dyna-Soar now would ride atop the Titan III transtage that would inject it into orbit and remain attached to serve as a retro-rocket at mission's end.

The design for Dyna-Soar called for highly-swept delta wings and two upturned fins at the wing tips. With a length of 35 ft, it lacked an onboard rocket engine and provided room for a single pilot only. Like ASSET, it relied on advanced hot structures, with a heat shield of columbium, well insulated, atop a main structure built from a nickel alloy that had been developed for use in jet engines. In September 1962, a full-scale mock-up was the hit of the show at an Air Force Association convention in Las Vegas. In addition to this, the Air Force named six test pilots who would fly Dyna-Soar as its astronauts.

In 1961 it was decided not to develop Dyna-Soar as a weapon-carrying system but purely as a research vehicle "to solve the difficult technical problem involved in boosting a body of high lift into orbit, sustaining man in it and recovering the vehicle at a designated place." To emphasize the experimental nature of the program, Dyna-Soar was renamed X-20 in 1962. In this new role, however, the program could not rely on a military justification; it would have to stand on its value as research. By 1963, this value was increasingly in question. ASSET, with its unpiloted craft, was promising to demonstrate hypersonic gliding entry and hot-structure technology at far lower cost. In the realm of piloted flight, NASA now was forging ahead with its Gemini program. Air Force officials were expected to participate in this program as well.

These officials still believed that their service in time would build piloted spacecraft for military purposes. In March 1963, Secretary of Defense William McNamara ordered a study that would seek to determine whether Gemini or the X-20 could better serve the role of a test bed for military missions. The results of the study gave no clear reason to prefer the latter. Further attempts by the Air Force to justify the X-20 followed but in December 1963 McNamara announced that he was canceling the program on the grounds that the X-20 was not to serve as a cargo rocket, could not carry substantial payloads, and could not stay in orbit for long-duration missions. He could not justify continuing with the program because it was costly and would serve "a very narrow objective."