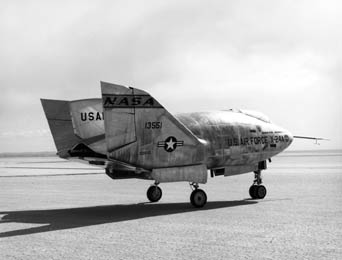 Martin Marietta's X-24A. Built for subsonic flight, it duplicated the shape of PRIME, which flew at near-orbital velocity. Credit: NASA. 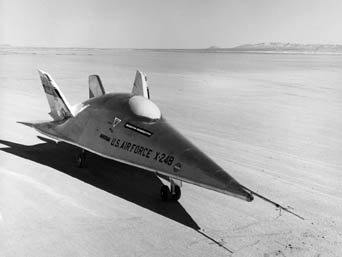 The X-24 was a program of early manned lifting bodies used by the United States Air Force and NASA to explore the low-speed flight characteristics of a subscale model, the X-23A, tested in the PRIME program.

There were two configurations of the X-24. The 7.5-m, 5,000-kg X-24A was carried under the wing of a B-52 bomber and released at an altitude of about 13,500 m. The X-24A could then either glide back to Earth or use its onboard rocket engine to accelerate to speeds of 1,600 km/h or climb up to 21,500 m to explore the characteristics of the design under various flight conditions.

A total of 28 flights, including 10 glides, were flown in 1969-71 before the design was changed to a delta-winged configuration and renamed the X-24B. In this form, a further 12 glides and 24 powered flights were made. The X-24 program was concluded in 1975.

Built for the Air Force by Martin, the X-24A was a bulbous-shaped aircraft, with three vertical fins at the rear for directional control. It weighed 6,270 lb without propellants, was just over 24 ft long, and had a width of nearly 14 ft.

The first unpowered glide flight of the X-24A occurred on April 17, 1969, flown by Air Force Major Jerauld Gentry. Gentry also piloted the vehicle on its first powered flight on March 19, 1970.

The X-24A was flown 28 times in a program which, like that of the HL-10, helped validate the concept that a wingless vehicle could be landed unpowered. Some three decades later, X-38 program managers elected to use the X-24A design to save money, since the existing X-24A aerodynamic database was complete. This limited the number of wind tunnel tests that would have been required for a totally new design.

Highest speed recorded by the the X-24A was 1,036 mph (Mach 1.6), and the maximum altitude reached by the craft was 71,400 ft. Both of those flights were flown by NASA research pilot John Manke, who was also the pilot on its final flight on June 4, 1971.

The X-24B's design evolved from a family of potential re-entry shapes proposed by the Air Force Flight Dynamics Laboratory, each with higher lift-to-drag ratios.

To reduce the costs of constructing a research vehicle, the Air Force returned the X-24A to Martin for modifications that converted its bulbous shape into one resembling a "flying flatiron" – a rounded top, flat bottom, and a double-delta planform that ended in a pointed nose.

Among the final flights with the X-24B were two precise landings on the main concrete runway at Edwards, which showed that accurate unpowered re-entry vehicle landings were operationally feasible. These missions, flown by Manke and Air Force Maj. Mike Love, represented the final milestone in a program that helped write the flight plan for today's Space Shuttle landings.

The final powered flight with the X-24B was on September 23, l975, flown by Bill Dana. It was also the last rocket-powered lifting body flight flown at Dryden. Ironically, it was Dana who also flew the last X-15 rocket plane mission about seven years earlier.

The X-24B is now on public display at the Air Force Museum, Wright-Patterson Air Force Base, Ohio.