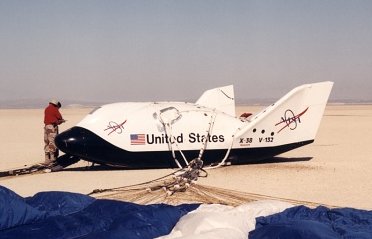 A ground crewman checks over the X-38 second prototype following a lakebed landing.

The X-38 was a technology demonstrator for a proposed ACRV (Assured Crew Return Vehicle) for the International Space Station. The seven-seat X-38, with a design based on that of the X-24 from the 1960s, was being developed at Johnson Space Center and Dryden Flight Research Center and had made several test flights. However, work on the program was stopped in 2001 following NASA budget cuts. It was replaced by the EELV-launched Orbital Space Plane (OSP), which eventually merged into the Constellation program currently planned to replace the Space Shuttle.