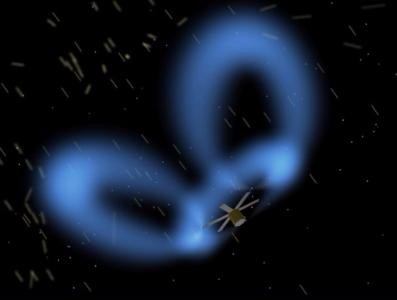 M2P2 (Mini-Magnetospheric Plasma Propulsion) is a novel propulsion concept under study at the University of Washington, Seattle, with NASA funding. M2P2 would use the solar wind to accelerate a spacecraft by pushing on a miniature version of Earth's magnetosphere generated by the craft. The injection of plasma from the Sun into an artificially generated magnetic field would drag the magnetic field lines out and form a bubble some 30–60 km in diameter, depending on the strength of field that the spacecraft produced. An engine using this technology is estimated to be 10–20 times more efficient than the Space Shuttle Main Engine. With a bottle of just 3 kg of helium as plasma fuel, the magnetic bubble could be operated for three months – the size of the bubble growing and shrinking in response to changes in the solar wind. Calculations have shown that there is enough power in the solar wind to accelerate a 136-kg space probe to speeds of up to 80 km/s, or 6.9 million km per day. By contrast, the Space Shuttle travels at a mere 7.7 km/s or 688,000 km per day. If launched by 2005, an M2P2 spacecraft could have reached the heliopause (where the solar wind runs into the interstellar wind) by 2015 – about four years ahead of Voyager 1.