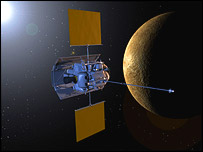 MESSENGER (Mercury Surface, Space Environment, Geochemistry and Ranging) was a NASA probe to investigate Mercury from an orbit around the planet. Successfully launched on 3 August 2004, MESSENGER made two flybys of Venus, one of Earth, and three of Mercury during a seven-year voyage that positioned it for orbital insertion in March 2011. It became the first spacecraft to orbit the innermost planet. During its science mission around Mercury, the probe imaged the surface with a high-resolution camera, analyzed the planet's surface composition with X-ray, gamma-ray, infrared, and neutron spectrometers, studied the magnetic field with a magnetometer, and determined the height of features with a laser altimeter. The only previous mission to Mercury was Mariner 10 in 1974. During the Mariner 10 passes, detailed data was collected only for half of the planet's surface. MESSENGER, by contrast, conducted an in-depth study of Mercury in its entirety. Carrying seven scientific instruments, it provided the first images of the whole surface. The 1.2-tonne, $426 million probe carried its own sunshade to protect it from the planet's high daytime temperatures. Following two mission extensions, the MESSENGER spacecraft used the last of its maneuvering propellant and deorbited as planned, impacting the surface of Mercury on 30 April 2015.

MESSENGER will be followed in orbit around Mercury by BepiColombo, a collaboration between Europe and Japan, which is due to arrive at the planet in 2025.