MOST (Microvariability and Oscillations of Stars) 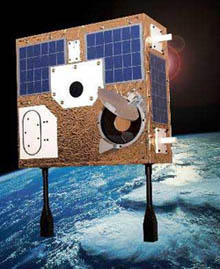 MOST (Microvariability and Oscillations of Stars) is Canada's first space telescope. An astronomical microsatellite mission that had been proposed by the Canadian company Dynacon Enterprises Ltd, it was a launched on 30 June 2003 by a three-stage Rockot launch vehicle from Pletesk into a low-Earth polar orbit (approximately 820 kilometers altitude with a100-min period). Also participating in the mission are the University of Toronto's Institute for Aerospace studies, and the physics and astronomy department of the University of British Colombia. The project is sponsored by the Canadian Space Agency's Small Payloads Program.

From its dawn-dusk sun-synchronous orbit, MOST can carry out observations of up to 8 weeks for a single object of interest using a 15-cm telescope photometer. Its scientific goals are to detect and characterize (1) acoustic oscillations in Sunlike stars, (2) reflected light from giant exoplanets, and (3) turbulent variations in Wolf-Rayet stars.