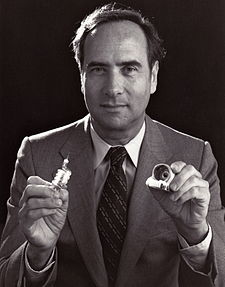 Theodore Maiman was a US physicist who successfully built the first optical maser which he called the laser. This was done in 1960 after he had first made improvements to the maser devised by Charles Townes. Maiman's ruby laser, based on a synthetic ruby crystal, was first operated on May 16, 1960 at Hughes Research Laboratories in Malibu, California. In 1962 Maiman founded the Korad Corporation to construct high-powered lasers.