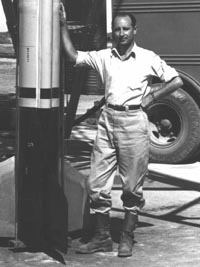 Frank Malina was an American pre-Space Age rocket engineer and second director of the Jet Propulsion Laboratory (1944–1946). As a PhD student at the California Institute of Technology in the mid-1930s, Malina began a research program to design a high-altitude sounding rocket. Beginning in 1936, he and his colleagues started the static testing of rocket engines in the canyons above the Rose Bowl, with mixed results, but a series of tests eventually led to the development of the WAC-Corporal rocket during World War II. After the war, Malina worked with the United Nations and eventually retired to Paris to pursue a career as an artist.