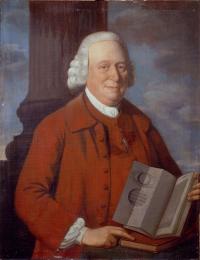 Nevil Maskelyne was an English astronomer and physicist, born in London, who invented the prismatic micrometer and served as Astronomer Royal 1765–1811. From Westminster School, Maskelyne passed to Catharine Hall, and subsequently to Trinity College, Cambridge, where he obtained a fellowship in 1756. In 1758 he was elected a Fellow of the Royal Society, and decided to devote himself to astronomy. In 1763 he went to Barbados for the Board of Longitude to test the newly-invented Harrison chronometers, and after his return was (1765) appointed Astronomer Royal. During the 46 years he held this office he won universal respect by the diligence and accuracy of his work, made several improvements in the arrangements and employment of the instruments, and was the first to mark the time to tenths of a second. In 1774, he visited Schiehallion, Perthshire, to make observations determining the density of the Earth in connection with that hill.

The first of his numerous publications was the British Mariner's Guide (1763). In 1767 he started the Nautical Almanac. His Tables for computing the Places of the Fixed Stars, etc, were published by the Royal Society in 1774. In 1776 he produced the first volume of the Astronomical Observations made at the Royal Observatory, Greenwich, from 1665. He was rector from 1775 of Shrawardine, Shropshire, and from 1782 of North Runcton, Norfolk.