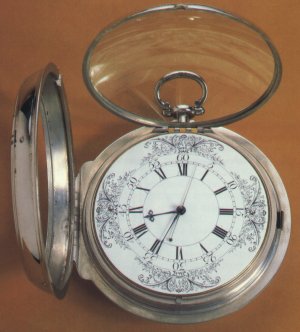 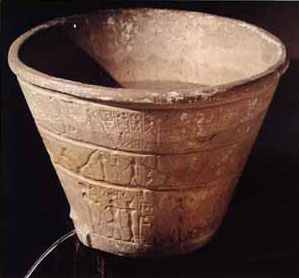 Clocks and watches are devices to indicate or record the passage of time, which have become essential features of modern life. In prehistory, time could be gauged solely from the position of celestial bodies; a natural development was the sundial, initially no more than a vertical post whose shadow was cast by the Sun directly onto the ground. Other devices depended on the flow of water from a pierced container (see clepsydra); the rates at which marked candles, knotted ropes, and oil in calibrated vessels burned down; and the flow of sand through a constriction from one bulb of an hourglass to the other.

Mechanical clocks were probably known in ancient China, but first appeared in Europe in the 13th century AD. Power was supplied by a weight suspended from a rope; later from a coiled spring; in both cases an escapement mechanism being used to control the energy release. Around 1657–58, Christiaan Huygens applied the pendulum principle to clocks; later, around 1675, his hairspring and balance-wheel mechanism made possible the first portable clocks – resulting eventually in watches. Jeweled bearings, which reduced wear at critical points in the mechanism, were introduced during the eighteenth century, and the first chronometer was also devised in this century. Electric clocks with synchronous motors are now commonly found in the home and office, while the atomic clock, which can be accurate to within one second in 3 million years, is of great importance in science.

An astronomical clock is a highly accurate clock that keeps either sidereal time or Universal Time. Formerly, such instruments were checked by timing the passage of clock stars across the meridian using a meridian or transit circle and a book of clock errors. Today, atomic clocks are used instead.

An atomic clock is a clock that uses the resonance frequencies of atoms to keep time with extreme accuracy. The electronic components of an atomic clock are regulated by the frequency of microwave radiation that is emitted or absorbed by the quantum transition (energy change) of an atom or a molecule. In atomic clocks, quantum transitions produce extremely regular waves of electromagnetic radiation. Clocks that run on the radiation from hydrogen atoms, for example, lose only one second in about 1,700,000 years.

A chronometer (Fig 1) is an extremely accurate clock, especially one used in connection with celestial navigation at sea (see also celestial sphere). It differs from an ordinary clock in that it has a fusee, by means of which the power transmission of the mainspring is regulated such that it remains approximately uniform at all times; and a balance made of metals of different coefficients of expansion to minimize the effects of temperature changes. The device is maintained in gimbals to reduce the effects of rolling and pitching. A chronometer's accuracy is checked daily and its error noted; the daily change in error is termed the daily rate.

A clepsydra, also known as a water clock, is an instrument in which the discharge of water from a storage tank is monitored in order to measure the passing of time (Fig 2). Clepsydras were used from ancient times until the Renaissance. "Clepsydra" is Greek for "water thief."

A hourglass is an ancient instrument to measure the passage of time. A quantity of fine, dry sand is contained in a bulb constricted at its center to a narrow neck. The device is turned so that all the sand is in the upper chamber: the time taken for the sand to trickle into the lower chamber depends on the amount of sand and on the diameter of the neck.

A sundial is a device for showing apparent solar time by the position of a shadow cast by an indicator called a gnomon. The gnomon slants upwards away from the dial at an angle determined by the latitude; it points due north in northern latitudes and due south in southern latitudes. Sundials were first used in the Near East about 5,000 years ago.