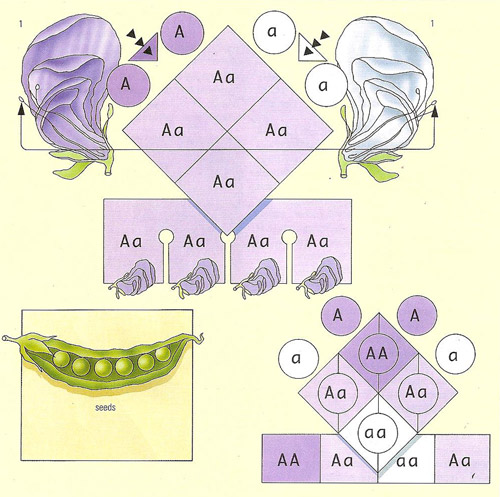 Mendel's discoveries, which were later rediscovered by Carl Correns and others, were primarily based on the cross-breeding of plants. The genetic characteristics of plants and animals can be studied by cross-breeding under controlled conditions. Mendel discovered that some characteristics are determined by genes that contain a dominant allele (or what he called a "factor") over others which contain a recessive allele (a). Flowering plants usually contain two alleles, but pollen or eggs (ova) contain only one. The pure-bred pea plants (1) are either purple or white. The F1 crosses produced by cross-breeding them are all purple, but carry one dominant and one recessive allele. The F2 generation will produce flowers in the ratio three purple to one white flower, as any flower with an A allele will be dominant.

Carl Correns was a German biologist and geneticist who, in 1900, rediscovered, along with two others, the works of Gregor Mendel outlining the principles of heredity. Correns conducted experiments to determine the validity of Mendel's laws and helped to provide evidence that proved his theories.