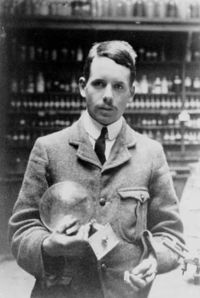 Henry Moseley was a British physicist who showed that the properties of an element depend on what became known as atomic number, equivalent to the element's nuclear charge.

Moseley was among the most brilliant associates of Ernest Rutherford. He studied physics at Oxford before joining Rutherford's department in Manchester in 1910. Initially, he worked on beta emission (see beta particles) from radium. Subsequently, he made clear the significance of the periodic table by demonstrating that the X-ray spectra obtained from elements varied in a regular manner with their position in the table. He established a series of values for each element. These values, later known as atomic numbers, indicated that the periodic table could be used to demonstrate some sort of fundamental pattern between the atomic structures of one element and another. He suggested that this pattern resulted from the positive charge of the nucleus which he equated with his "atomic number".

Moseley enlisted in the Royal Engineers on the outbreak of the First World War. He was killed in Gallipoli in 1915.