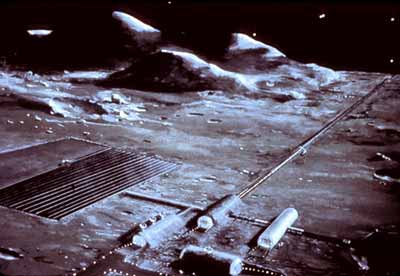 Mass driver on the Moon.

A mass driver, also called an electromagnetic cannon, is a method of spacecraft propulsion that would use a linear motor to accelerate payloads up to high speeds. All existing and contemplated mass drivers use coils of wire energized by electricity to make electromagnets. Mass drivers can be used to propel spacecraft in two different ways: A large, ground-based mass driver can be used to launch spacecraft away from the Earth or another planet or moon, or a spacecraft could have a mass driver on board, ejecting large pieces of material into space to propel itself. A hybrid design is also possible. Prototype mass drivers have existed since 1975. Most were constructed by the Space Studies Institute in order to prove their properties and practicality.

A launch installation that would consist of some electrical power station and a long linear motor. Vehicles would be placed on the launcher and accelerated. They could be released at escape velocity for interplanetary voyages, or they could be launched at near orbital velocity and use a short rocket burn to circularize their orbit. The Earth's strong gravity and thick atmosphere make such an installation difficult, so many proposals have been put forward to place such an installation on the Moon. The coils could be constructed of aluminum to save mass, and to permit them to be constructed from lunar materials. The best known performance occurs with an aluminum coil as the payload. The coils of the mass-driver induce eddy-currents in the payload's coil, and then act on the resulting magnetic field. There are two sections of a mass-driver. The maximum acceleration part spaces the coils at constant distances, and synchronizes the coil currents to the bucket. In this section, the acceleration increases as the velocity increases, up to the maximum that the bucket can take. After that, the constant acceleration region begins. This region spaces the coils at increasing distances to give a fixed amount of velocity increase per unit of time. In the prototypes, the payload would be held in a bucket and then released, so that the bucket can be decelerated and reused. In this mode, the major proposal for use of mass-drivers was to throw lunar material at space habitats so that they could process it using solar energy.

A mass driver carried by a spacecraft and used as its primary engine. With a suitable source of electrical power (probably a nuclear reactor) the spaceship could use the mass driver to accelerate pieces of matter of almost any sort, boosting itself in the opposite direction. Since current linear motors can accelerate cargo to 30 kilometers per second, an engine using one would have a specific impulse of about 3,000 sseconds. However, no theoretical limit is known for the size, acceleration or muzzle energy of linear motors, so this can probably be improved significantly. Efficiency is also quite good; linear motors can, with current technology, convert up to about 50% of the electrical energy into kinetic energy. Since a particle of mass m has momentum mv and kinetic energy mv2/2, the energy requirements vary inversely with the specific impulse, so in a design one must choose a trade-off between energy consumption and consumption of reaction mass. Since a mass driver could use any type of mass for reaction mass to move the spacecraft, this, or some variation, seems ideal for deep-space vehicles that scavenge reaction mass from found resources.

Another variation is to have a mass-driver on a spacecraft, and use it to 'reflect' masses from a stationary mass-driver. Each deceleration and acceleration of the mass contributes to the spacecraft's momentum. The spacecraft need not carry reaction mass, and doesn't even need much electricity, beyond the amount needed to replace losses in the electronics. The system could also be used to deliver pellets of fuel to the spacecraft for use in powering some other propulsion system. This could be considered a form of beam-powered propulsion. An extreme version of such a design is a space fountain, in which the 'spacecraft' uses this drive to hover outside the atmosphere so it can serve as a launch platform.