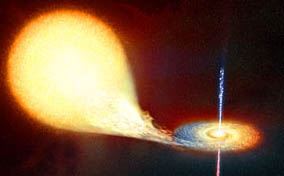 A microquasar is an object of stellar mass that displays in miniature some of the properties of quasars, including strong emission across a broad range of wavelengths from radio wave to X-ray, rapid variability in X-rays, and radio jets. A microquasar consists of a binary system in which a normal star orbits around, and loses matter to, a nearby compact object, either a black hole or a neutron star. The lost matter enters a fast-spinning accretion disk, is heated to millions of degrees, and then either falls onto the compact object or is ejected as a bipolar flow.

A dozen or so microquasars have been found in the Milky Way Galaxy. One of them, known as GRS 1915+105, lies 40,000 light-years away in Aquila and was discovered in 1994 by the GRANAT X-ray satellite. It consists of an ordinary star with about the same mass as the Sun orbiting around the heaviest stellar black hole found to date, with a mass of 14 solar masses. In its year of discovery, it was observed to shoot out material with one-third the mass of the Moon in opposite directions at 92% of the speed of light. Another microquasar, LS 5039, is much closer, at a distance of only 9,100 light-years, has twin radio-bright jets, each about 2.6 billion km long, but is surprisingly dim in X-rays, suggesting that future searches might reveal many more such X-ray-dim objects. If so, it may be that microquasars are a substantial, if not dominant, source of high-energy particles and radiation in the Galaxy.

The closest known microquasar and black hole to Earth is V4641 Sagittarii, which lies only about 1,500 light-years away.