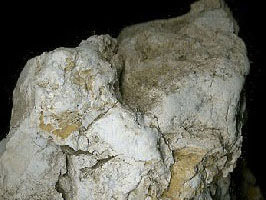 Montmorillonite is the general name for a group of soft clay minerals composed of hydrous calcium-sodium aluminium-magnesium-iron silicate. The minerals are moisture-sensitive clays weathered out of igneous rocks, and are a common constituent of soil. It has been shown to function as a catalyst in the formation of RNA oligomers. Montmorillonite is used in the paper industry for “carbon-less” copying paper. It is white, yellowish, or gray. Hardness 1-2; relative density 2.5