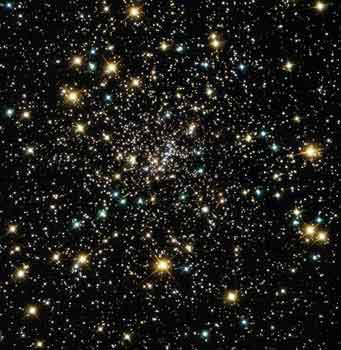 The core of NGC 6397 as seen by the Hubble Space Telescope.

NGC 6397 is one of the two nearest globular clusters to Earth (the other one being M4). It was discovered by Nicolas Lacaille in 1751–52.

A number of blue stragglers have been identified in NGC 6397 with masses two and occasionally three times as massive as the lower mass cluster stars otherwise present, supporting evidence for their formation from two and even three star collisions.

A study of the motion of NGC 6397 has shown that the cluster passed through the galactic disk less than 5 million years ago. The point where it passed through is very close to the position where the open cluster NGC 6231 (often considered the core of the Scorpius OB1 association) would have been at that time. Age determinations for NGC 6231 are consistent with its formation at the time of or soon after the NGC 6397 disk crossing. This suggests that the disk passage of NGC 6397 may have triggered the formation of NGC 6231.1 If so, this would be the first observational evidence for the disk passage of globular clusters as a dynamical trigger of star formation, a mechanism previously proposed by Wallin et al.2.