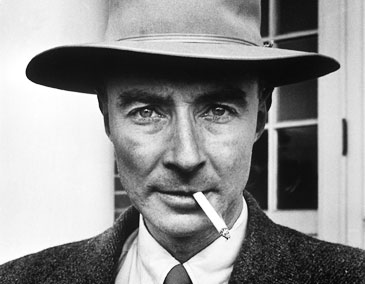 Robert Oppenheimer was an American physicist whose influence as an educator is still felt today and who headed the Manhattan Project, which developed the atomic bomb. His main aim was the peaceful use of nuclear power (he fought against the construction of the hydrogen bomb but was overruled by President Truman in 1949); but, because of his left-wing friendships, was unable to pursue his researches in this direction after being labeled a security risk (1954). He also worked extensively on the theory of what became known as black holes, in particular helping to establish the so-called Oppenheimer-Volkoff limit.

Oppenheimer was born into a wealthy New York family and educated at Harvard and Göttingen. In 1929 he took up posts at both the University of California at Berkeley and California Institute of Technology, having studied under whilst traveling in Europe. When the Manhattan Project was set up in 1942, Oppenheimer was asked to become director of the Los Alamos laboratories where much of the work was done. Having skillfully carried out this role, leading to the rapid development of the atomic bomb, he attempted to remain a Government adviser on nuclear weapons, but was forced to resign in 1953. He became director of the Institute for Advanced Study at Princeton in 1947 and remained there after his retirement in 1966.

Oppenheimer's early success in research began in 1930 when he analyzed relativistic quantum mechanics and theory of the electron (1928). He showed that a positively charged antiparticle with the same mass as the electron should exist, and this positron was first seen by in 1932. During the 1930s Oppenheimer built up a formidable team of young theoretical physicists around him, the first time that the subject had been studied intensely outside Europe. In 1939, working on stellar structure, he showed that any massive star, when its thermonuclear energy is exhausted, will collapse to form a black hole, which has mass but from which light cannot escape.

After 1942 as director of Los Alamos he concentrated on gathering scientists and generating an atmosphere of urgency, skillfully handling the interface between his military superior, General Groves, and the unorthodox research scientists under him.

Oppenheimer's wife and brother were left-wing sympathizers and possibly communists, and he ran into difficulties in 1943 when Groves demanded the name of a communist agent who had approached Oppenheimer; after much delay he finally gave it. The first atomic test explosion took place in July 1945, and two atomic bombs ended the war with Japan a month later.

After the war Oppenheimer initially continued his important role in atomic energy, but he opposed the development of the hydrogen (fusion) bomb. In 1953 his political background and his support for the Super Program (the hydrogen bomb project) were questioned, and President Eisenhower removed his security clearance, ending his Government service. However, the Fermi Award was conferred on him by President Johnson in 1963, implying that doubts about his integrity had been resolved.