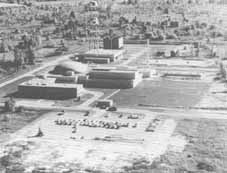 Plum Brook Research Station is a rocket propulsion test site, located at Sandusky, Ohio, and operated by the Glenn Research Center. It hosts the world's largest space environment simulation chamber, in which upper-stage engines can be tested under conditions like those encountered beyond Earth's atmosphere. Among Plum Brook's other facilities are a large hypersonic wind tunnel and a tank for experimenting with cryogenic fuels. NASA is currently decommissioning two experimental nuclear reactors at Plum Brook which were used in the 1960s to study the effects of radiation on materials used in spaceflight.