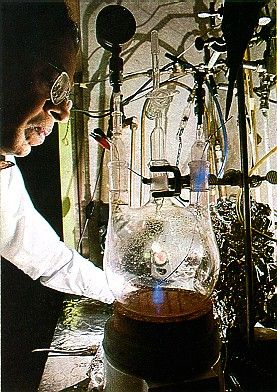 Cyril Ponnamperuma was a Sri Lankan-born professor of chemistry and director of the Laboratory of Chemical Evolution at the University of Maryland, College Park, and former director of the program in Chemical Evolution in the Exobiology Division at NASA Ames Research Center. Ponnamperuma's interest in prebiotic synthesis went back to his undergraduate days at Birkbeck College, University of London, where he studied under J. D. Bernal, receiving his BSc in 1959. He then joined Melvin Calvin's group at the University of California, Berkeley, receiving his PhD in 1962, before moving to Ames as a postdoctoral associate and carrying out pioneering experiments on the origin of life. In the preface to Exobiology (1972), he points out that:

[O]ur primary objective becomes the understanding of the origin of life in the universe. This is the scientifically broader question before us. If we can understand how life began on the Earth, we can argue that the sequence of events which lead to the appearance of terrestrial life may be repeated in the staggering number of planetary systems in our universe.

Ponnamperuma thus aligned himself with others, including Leonard Troland, Harold Spencer Jones, and Calvin, who regarded the evolution of life as almost inevitable given the right starting conditions. In 1971 he joined the faculty at Maryland.