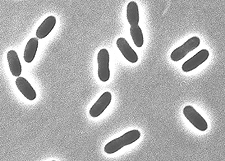 A psychrophile, also known as a cryophile, is an organism that reproduces and grows best at low temperatures, typically in the range -10 to 20°C (14 to 68°F). Psychrophiles are a type of extremophile. Some have been found to thrive in the Arctic and Antarctic oceans, which remain frozen for much of the year. Others have been recovered from core samples taken from the Greenland ice sheet at depths of about 3 kilometers. Psychrotolerant organisms, by contrast, are mesophiles that can survive at low temperatures but grow more slowly.

Psychrophiles possess enzymes that are adapted to function at low temperatures and are denatured at moderate temperatures. They also exhibit polyunsaturated fatty acids in their lipids.

While sperm banks and bacterial culture collections rely on the preservation of live samples in liquid nitrogen at -196°C, the lowest recorded temperature for active microbial communities and animals is much higher at -18°C. Freezing of water located within a cell is almost invariably lethal. The only exception to this rule known from nature is the nematode Panagrolaimus davidi, which can withstand freezing of all of its body water. In contrast, freezing of extracellular water – water outside of cells – is a survival strategy used by a small number of frogs, turtles, and one snake to protect their cells during the winter. Survival of freezing must include mechanisms to survive thawing, such as the production of special proteins or cryoprotectants (additives that protect against the cold) called antifreeze proteins. The other method to survive freezing temperatures is to avoid freezing in the first place. Again antifreeze molecules are produced which can lower the freezing point of water 9 to 18°C. Fish in Antarctic seas manage to employ these mechanisms to their advantage. Other changes with low temperature include changes in the structure of a cell's proteins – most notably their enzymes – so as to allow them to function at lower temperatures. The fluidity of cell membranes decreases with temperature. In response, organisms that are able to adapt to cold environments simply increase the ratio of unsaturated to saturated fatty acids thus retaining the required flexibility of membranes.