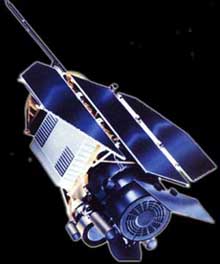 ROSAT ((Röntgen Satellite) was a German-American-British X-ray and ultraviolet astronomy satellite, named for Wilhelm Röntgen who discovered X-rays; it operated for almost nine years. The first six months of the mission were dedicated to an all-sky survey in X-rays (0.1–2.5 keV) and ultraviolet (62–206 eV) using an imaging telescope with a sensitivity about 1,000 times greater than that achievable with the instruments on Uhuru. During the subsequent pointed phase of its mission, ROSAT made deep observations of a wide variety of objects. Its operation ended in February 12, 1999.