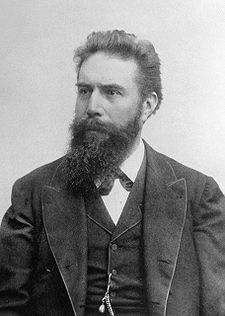 Wilhelm Röntgen was a German physicist who was awarded the first Nobel Prize in Physics, in 1901, “in recognition of the extraordinary services he has rendered by the discovery of the remarkable rays subsequently named after him.” This high-energy radiation, though at first known as Röntgen rays, became known as X-rays. Röntgen made his discovery in 1895 when by chance he noticed that a phosphor screen near a vacuum tube through which he was passing an electric current fluoresced brightly, even when shielded by opaque cardboard.

The röntgen unit is named after him.

One afternoon in 1895 Röntgen, professor of physics and rector of the University of Würzburg had been repeating some experiments with a small cathode-ray tube designed by another German physicist, Philipp Lenard. This tube, made of glass and about 9 inches long, was fitted with a small metal plate or electrode at each end. When an almost perfect vacuum had been created in the tube by a powerful vacuum pump and a voltage difference was applied to the electrodes, a stream of invisible rays, called cathode rays, left the negatively charged electrode or cathode. Impinging on the glass wall of the tube, they caused it to glow with a green fluorescence. One small part of the wall of the Lenard tube, however, was made of a thin piece of aluminum foil, and through this 'window' some of the cathode rays escaped to the exterior. If a sheet of paper covered with a thin coating of barium platinocyanide were held in the beam of rays emerging from the window, the salt fluoresced, just like the walls of the tube.

Having repeated Lenard's experiments to his satisfaction, Röntgen thought he would do them all over again with a windowless kind of cathode-ray tube designed by Johann Wilhelm Hittorf (1824–1914) He arranged his apparatus and switched on the power to the electrodes. Then, just as he was about to demonstrate that cathode rays did not escape from the windowless Hittorf tube, he noticed that a barium platinocyanide screen lying several feet away was fluorescing brightly. It seemed impossible. Nobody before had managed to obtain cathode rays outside a Hittorf tube, nor had anyone seen cathode rays travel so far. Something new, something mysterious, must surely be the case of the strange fluorescence. Röntgen set out to discover what it was.

For several weeks he remained in his laboratory working away at his problem. He soon found that his newly discovered rays would penetrate paper, cardboard, and wood, and that, by using materials of increasing density, he could block more and more of the rays and thus cause dark shadows on the parts of the screen which they did not penetrate. He showed that metals, particularly lead, gave very dark shadows since they were almost impenetrable. He received quite a shock when he held a small lead disk above the screen and saw, for the first time, the shadows of the bones in his own hand. He found, too, that the rays exposed a photographic plate, and that a permanent photographic record could be made of anything that was placed between the tube and the plate.

By the end of 1895, Röntgen felt that he had investigated hid discovery sufficiently for it to be revealed to the world. In a brief paper which he submitted to the Würzburg Physico-Chemical Society he described his discovery of the mysterious new rays and the experiments that he had performed with them. With great astuteness, he also indicated his belief that these rays came from the glass wall of the tube when it was struck by the rays from the cathode. His paper was accepted, published, and acclaimed within a few days.