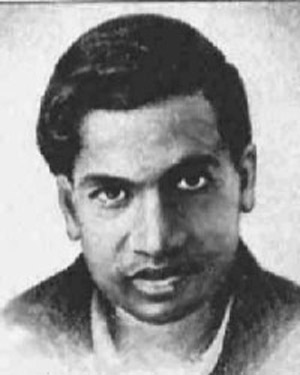 Srinivasa Ramanujan was an extraordinary, largely self-taught, Indian mathematician who, in the most unorthodox way, made significant contributions to number theory, including the subject of elliptic functions, continued fractions, and infinite series. During much of his early work, he was unaware that he was rediscovering results that had taken other mathematicians centuries to achieve. But even in cases where he arrived at conclusions already known he'd often do it having traveled by a new and original route, and, in many cases, almost purely by intuition.

Ramanujan was employed in a lowly clerk's position in Madras (now Chennai), when, in 1913, he wrote letters to three eminent mathematicians in England describing some of his results. Two of the three letters were returned unopened. However, G. H. Hardy recognized Ramanujan's abilities and arranged for him to come to Cambridge. Because of his lack of formal training, Ramanujan sometimes failed to distinguish between formal proof and apparent truth based on intuition or numerical evidence. His extraordinary innate familiarity with numbers, was revealed by an incident recalled by Hardy:1

I remember once going to see him when he was lying ill at Putney. I had ridden in taxi cab number 1729 and remarked that the number seemed to me rather a dull one, and that I hoped it was not an unfavorable omen. "No," he replied, "it is a very interesting number; it is the smallest number expressible as the sum of two cubes in two different ways [1729 = 13 + 123 = 93 + 103]."

Unfortunately, Ramanujan's health deteriorated rapidly in England, perhaps due to the unfamiliar climate and food, and to the isolation which Ramanujan felt as the sole Indian and a devout Hindu in a culture which was alien to him. Ramanujan was sent home to recuperate in 1919, but tragically died the following year at the age of only 32. Although he published some of his results in journals, much of his work and conclusions has only come to light more recently, from a scrutiny of his disorganized but fascinating notebooks.2