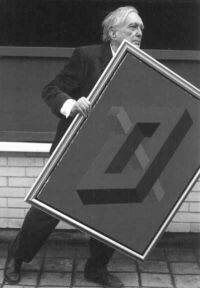 Oscar Reutersvärd was a Swedish artist who pioneered the creation and design of impossible figures. His work in this area goes back to one day in 1934 when, as a young student in Stockholm, he started doodling in the margins of a textbook during a long lecture. Reutersvärd's doodle began with an outline of a perfect six-pointed star. Once the star was complete he added cubes around the star, nestled into the spaces between the points. He soon realized that what he'd drawn was paradoxical: something that couldn't be built in the real world. A different version of this figure, independently created by Roger Penrose, would later be called the Penrose triangle. Thus began a lifelong fascination with such objects, which later included work on the impossible staircase (a design he sketched in 1950 while on a cross-country train ride), which is known as the Penrose stairway, and the discovery of the tribar illusion. In the early 1980s the Swedish government honored Reutersvärd's achievements by issuing a set of three stamps depicting impossible figures, including a version of his 1934 weird cubes design.