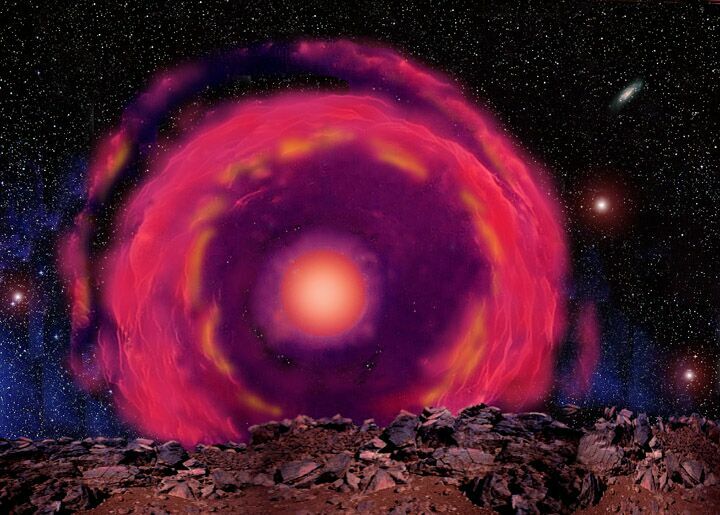 Artist's impression of Rho Cassiopeiae following its last outburst in 2000 from the surface of a hypothetical planet. Credit: David A. Aguilar, Harvard-Smithsonian Center for Astrophysics.

Rho Cassiopeiae is an F-type hypergiant and one of the most luminous known stars in the Galaxy. Although dimmed by two magnitudes as a result of interstellar dust, it still shines at near-fourth magnitude from an immense distance in the constellation Cassiopeia. Its distended surface reaches out 40% further than the orbit of Mars.

Rho Cassiopeiae is an irregular or possibly semi-regular variable, and seems to have multiple periods of 820, 350, 510, and 645 days; however, these change, so the star may be quite unpredictable. In the summer of 1946, it took a dive from 4th to 6th magnitude and, more remarkably, altered its spectral type. Pumping a huge amount of gas into an expanding thick atmosphere, it seemed to become a cool M star. A year later, it was returning to normal. The star did not so much dim as cool, the lower temperature causing it to place much of its radiation in the infrared. In 2000, Rho Cas underwent another outburst in which it ejected enough material to form 10,000 Earths, or about 0.3% solar mass.

In its more stable state, Rho Cas still blows a 10 km/s wind at a loss-rate of a hundred thousandth of a solar mass a year – a hundred million times the flow rate of the solar wind. It has little time left before it grows an iron core and explodes as a supernova.