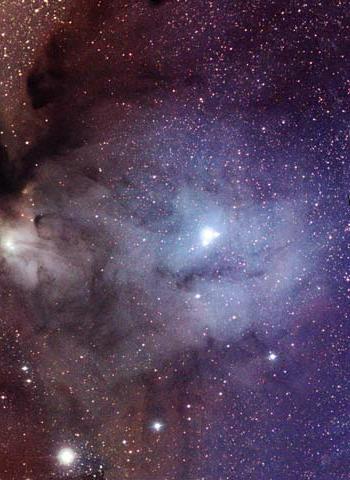 Glycoaldehyde molecules found around a young star in the Rho Ophiuchi complex.

The Rho Ophiuchi Nebula is a complex of nebulae in the constellation Ophiuchus that is one of the nearest low- and intermediate-mass star formation regions to the Sun at a distance of about 460 light-years. Colorful emission nebulae and reflection nebulae together with dark clouds make up the complex, which takes its name from one of the bright stars within the nebulosity, Rho Ophiuchi. It occupies an area of the sky measuring 4.5° by 6.5° in the constellation Ophiuchus on the border with Scorpius, and contains in total about 3,000 solar masses of material.

Most of the gas and dust is dark and very cold – as is typical of stellar nurseries – with temperatures in the range 13–22 K. The region is a fertile hunting-ground for interstellar molecules of various kinds. There are two major concentrations of material within the overall complex. The larger of these contains dense star-forming core known as Lynds 1688 (L1688), which is the scene of the most active star formation and accounts for more than half the mass of the complex, along with two filaments. The second includes the star-forming cloud L1689 and a single filament. Some of the structures within the complex appear to be the result of a passing shock wave which emanated from the direction of the neighboring Sco OB2 association.

Among other objects located in the Rho Ophiuchi cloud complex is J162349.8-242601 – the first brown dwarf to be found in a star-forming region.


Sugar molecules around a young star

In August 2012, astronomers announced for the first time the detection of molecules of a type of sugar, glycolaldehyde, in the gas cloud immediately surrounding an infant star system – an infrared-emitting binary star known as IRAS 16293-2422.[1] The molecules were detected, using ALMA (Atacama Large Millimeter / Submillimeter Array), at a distance from the central binary roughly equal to that of Uranus from the Sun, providing further evidence that some of the molecules significant to the origin of life-as-we-know-it are to be found in places where planets can be expected to form. Significantly, the gas in which the molecules were detected is falling in toward one of the stars in the system.