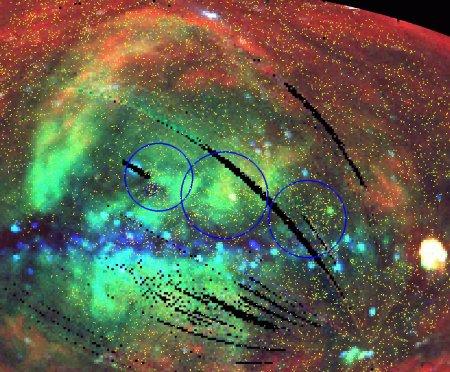 Wide field X-ray image of the Scorpius-Centaurus association constructed from the data of the ROSAT All Sky Survey Background maps. The yellow dots mark the positions of bright X-ray sources detected in the survey (only about 10% of the brightest X-ray sources are shown). The blue circles mark the three subgroups Upper Scorpius, Upper Centaurus-Lupus, and Lower Centaurus-Crux (from left to right).

The Scorpius-Centaurus (Sco-Cen) Association is the nearest OB association to the Sun. It is centered about 470 light-years away in the Gould Belt and contains several hundred stars, mostly of type B, including Shaula, Lesath, and Antares. Though born roughly at the same time, the association's stars are not gravitationally bound, and the association is rapidly expanding.