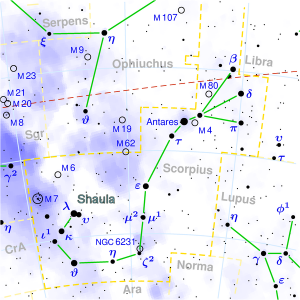 Shaula (Lambda Scorpii) is the second brightest star in the constellation Scorpius. Its Arabic name means "the stinger." Along with Lesath and several other stars in southern Scorpius, it belongs to the huge, relatively nearby Scorpius OB1 Association.

Shaula is a subgiant B star with a temperature around 25,000 K and a total luminosity that is about 35,000 that of the Sun. It is, however, a close double made of roughly similar hot stars with an orbital period of 5.9 days. There may also be a third, more distant companion, possibly a white dwarf given that Shaula is an unusually strong source of low-energy X-rays.

Shaula has either stopped hydrogen fusion in its core or is close to doing so. With a mass of around 11 solar masses, it may eventually explode or more likely turn into a heavy white dwarf, possibly one with a neon-oxygen core. Like Mirzam, it is a Beta Cephei star, fluctuating by less than a tenth of a magnitude with two simultaneous periods of 0.21 and 0.11 days.