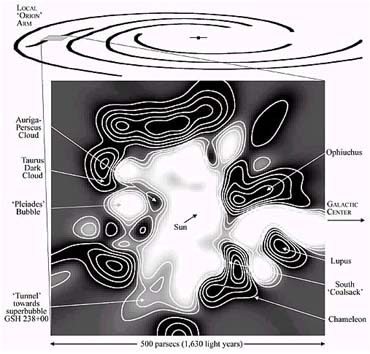 Map of the cold, dense interstellar gas surrounding the Local Bubble in the plane of the Galaxy. White areas represent regions of extremely low gas density (which are probably filled with plasma); dark areas reveal where large condensations of cold, dense gas occur. Notice that the local cavity is surrounded by many of these condensations, but this "wall" is broken in several places by low density interstellar tunnels that link the local cavity with other nearby bubble cavities such as the Pleiades and GSH 238+00+09.

The Local Bubble is a great cavity in the interstellar medium (ISM), at least 300 light-years across, within which the Sun and many nearby stars reside. The Local Bubble has a neutral hydrogen density of only about 0.07 atoms per cm3 – at least 10 times lower than the average ISM in the Galaxy – and also contains a thin gruel of million-degree X-ray-emitting plasma. These observations have led astronomers to conclude that the Bubble was formed between a few hundred thousand and a few million years ago by several relatively nearby supernova explosions that pushed aside gas and dust in the ISM leaving the current depleted expanse of hot, low density material. A prime suspect for an object left behind by this supernova activity is Geminga.

The 'Bubble' may be a misnomer since it appears to have an hourglass shape that is narrowest in the galactic plane and that widens above and below the plane. In fact, in directions away from the galactic plane the Bubble appears to be opened-ended, bursting into the galactic halo, so that "Local Tube" describes it better. Inside it are numerous cloudlets, oriented in sheet-like structures near the Bubble's boundary. The Sun, along with several neighboring stars, is presently embedded in a group of such cloudlets, known as the "Local Fluff Complex" or, more prosaically, as the local interstellar medium (LISM), that is passing through the Local Bubble. These floating islands of neutral hydrogen atoms have resulted from the expansion of an even larger bubble, the Loop I superbubble, up against our own cavity. The Loop I superbubble was created by supernovae and stellar winds in the Scorpius-Centaurus Association, which lies about 500 light-years away. When the Local Bubble and the Loop I collided, the Local Fluff Complex formed at the boundary between the two. This boundary lies 50 to 130 light-years away and through it the cloudlets are invading our Local Bubble. The Sun lies very close to the edge of a cloudlet named the Local Interstellar Cloud and is moving roughly perpendicular to it.

Branching off from the Local Bubble, through the surrounding dense gas, appear to be a number of tunnels that open out into other cavities. The interconnecting cavities and tunnels, analogous to the holes in a sponge, were created by supernovas or very strong stellar winds that swept out large regions and, when they encountered one another, merged into passageways. If this system of interlocking, gaseous cavities is characteristic of the entire Galaxy, it represents a dramatic confirmation of a 30-year-old theory of the Milky Way.