Fig 1. Flashes of radiation emanate from pulsars, rapidly spinning stellar masses only 20 km across. Young pulsars shine prominently at gamma-ray energies (left). The graphs (right) show variations in the brightness of pulsars as seen in different regions of the electromagnetic spectrum. For poorly understood reasons, some pulsars appear synchronised in all parts of the spectrum, whereas others are staggered; Geminga does not show up at all in radio telescopes.. 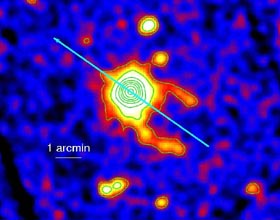 Geminga is a neutron star in the constellation Gemini that is the second brightest source of high-energy gamma rays in the sky. Discovered in 1972, by the SAS-2 satellite, its name is both a contraction of "Gemini gamma-ray source" and an expression in Milanese dialect meaning "it's not there."

For nearly 20 years, the nature of Geminga was unknown, since it didn't seem to show up at any other wavelengths. Then, in 1991, an exceptionally regular periodicity of 0.237 sec was detected by the ROSAT satellite in soft X-ray emission, indicating that Geminga is almost certainly a pulsar (a flickering neutron star). Its invisibility at radio wavelengths – it's the only known pulsar that is radio-quiet – may be because its beams of radio radiation don't sweep past Earth. It has also been identified optically with an extremely dim blue star, 100 million times fainter than anything visible to the naked eye. A comparison of images of the suspected optical counterpart taken over an eight-year period shows a proper motion that is consistent with a distance to Geminga of about 330 light-years, making it easily the closest known pulsar to Earth.

Geminga is believed to be the stellar remains of a supernova that took place some 300,000 years ago and which is, at least partly, responsible for clearing out a low density cavity in the interstellar medium in the vicinity of the solar system, known as the Local Bubble. High precision timing of Geminga, achieved by combining observations made by the COS-B satellite in the late 1970s and observations by the Energetic Gamma Ray Experiment Telescope (EGRET) aboard the Compton Gamma Ray Observatory, have indicated that the pulsar may have a companion planet (see pulsar planets). However, the variations in the pulsar's period may also be due to pulsar timing noise and further observations are needed to discriminate between these two possibilities.