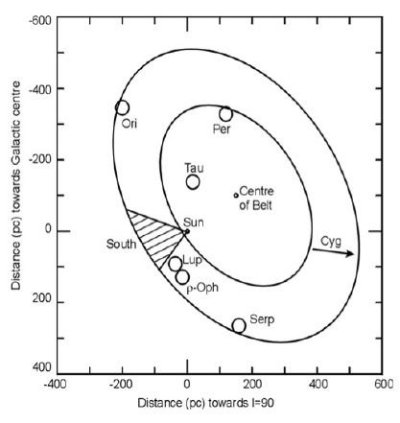 A schematic of the Gould Belt. Credit: Joint Astronomy Center.

The Gould Belt is a partial ring or disk of hot, young stars, of types O and B, and star-forming molecular clouds, within which the Sun lies (approximately 40 light-years (12 pc) north of the Belt's equatorial plane and about 325 light-years (100 pc) from its center). The Gould Belt has a diameter of about 3,000 light-years and is inclined to the galactic plane at about 20°. It appears to be a spur connected to the lower edge of the Orion Arm of the Galaxy. Among its most prominent components are the bright stars in Orion, Canis Major, Puppis, Carina, Centaurus, and Scorpius, including the Scorpius-Centaurus Association. It is thought to be 30 to 50 million yr old but its origin is unclear. It is named after Stephen Gould, who established its existence in 1879.