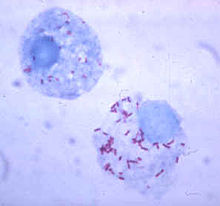 Rickettsia is a genus of Gram-negative bacteria that can exist in the form of cocci (0.1 μm in diameter), rods (1–4 μm long) or threads (10 μm long). Being obligatory intracellular organisms, the Rickettsia survival depends (like viruses) on entry, growth, and replication within the cytoplasm of eukaryotic host cells. Rickettsiae are primarily parasites of arthropods, ticks lice, fleas, and mites, but they can be transmitted to the larger animals via insects mites. They are responsible for a number of diseases in humans including typhus, scrub typhus, and Rocky Mountain spotted fever; related organisms cause Q fever and psittacosis. They are sensitive to tetracyclines and cause characteristic serological reactions cross-specific to Proteus bacteria.

Rocky Mountain spotted fever is a tick-borne rickettsial disease seen in much of the United States, especially the Rocky Mountain region. It causes fever, headache, a characteristic rash starting on the palms and soles, later spreading elsewhere. Tetracyclines are effective, though untreated cases may be fatal.