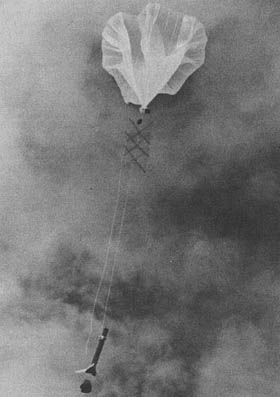 A Navy rockoon just after a shipboard launch. A Deacon rocket is suspended below the balloon.

A rockoon is a high-altitude balloon from which a small sounding rocket could be launched. The first rockoon was sent up in 1952 from the icebreaker Eastwind off Greenland by a research group headed by James Van Allen. It could carry a 9-kg payload to an altitude of 95–110 km. Rockoons were used in great numbers by Office of Naval Research and University of Iowa research groups in 1953–55 and the International Geophysical Year 1957–58, from ships in the sea between Boston and Thule, Greenland.