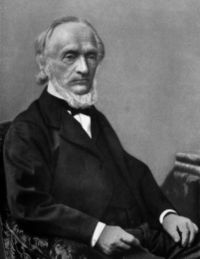 Ludwig Schläfli was a German mathematician whose worked centered on geometry, arithmetic, and the theory of functions. He made an important contribution to non-Euclidean geometry when he proposed that spherical three-dimensional space could be thought of as the surface of a hypersphere in Euclidean four-dimensional space.

Schläfli started out as a schoolteacher and amateur mathematician. He was also was an expert linguist and spoke many languages, including Sanskrit. In 1843 he served as a translator for the great mathematicians Jakob Steiner, Karl Jacobi, and Peter Dirichlet during their visit to Rome and learned a great deal from them. Ten years later he became professor of mathematics at Bern. However, his true importance was only appreciated following the publication of his magnum opus Theory of Continuous Manifolds in 1901, several years after his death.

The Schläfli symbol is a notation, devised by Ludwig Schläfli, which describes the number of edges of each polygon meeting at a vertex of a regular or semi-regular tiling or solid. For a Platonic solid, it is written {p, q}, where p is the number of sides each face has, and q is the number of faces that touch at each vertex.