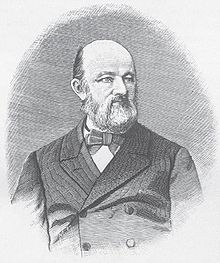 Julius Schmidt was a German astronomer best known as a lunar cartographer. He reportedly became interested in the Moon when, at the age of 14, he came across a copy of Schröter's Selenotopographical Fragments. He devoted the rest of his life to observing, measuring, and drawing the Moon, amassing in the process an incredible amount of selenographic information.

Schmidt began his career in Germany, spent some time in Moravia, worked at a number of German observatories, and in 1858 became director of the Athens Observatory in Greece. He remained in Greece for the rest of his life. His observations were made with a variety of telescopes, most notably a 15.8-cm refractor by Plössl. Chaptre der Gebirge des Mondes (The Topographical Chart of the Moon) published in Berlin, is his piece de resistance, representing the visible surface of the Moon in an area two meters diameter, and showing about 30,000 craters. This map was the most important and accurate to be produced since that of Wilhelm Beer and Johann Mädler published 41 years earlier, and compared with modern charts up to the Apollo era.