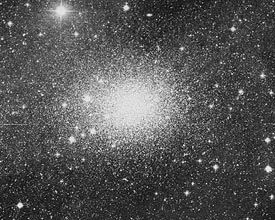 The Sculptor Dwarf is a dwarf elliptical galaxy that is one of 14 known satellite galaxies of the Milky Way. Discovered in 1938 by Harlow Shapley, it lies about 285,000 light-years away in the constellation Sculptor, and has an absolute magnitude of -11.28 and a mass of about 3 million solar masses. Despite its proximity, the galaxy was discovered as recently as 1937, due to the fact that its stars are faint and spread thinly across the sky.

The large proportion of old stars makes the Sculptor Dwarf, and its proximity, makes it a prime target for studying the earliest periods of star formation. In a recent study, astronomers combined all the data available for the galaxy to create the most accurate star formation history ever determined for a dwarf spheroidal. This analysis revealed two distinct groups of stars in the galaxy. The first, predominant group is the older population, which is lacking in heavier elements. The second, smaller population, in contrast, is rich with heavy elements. This youthful stellar population is concentrated toward the galaxy's core.

The stars within dwarf galaxies, such as the Sculptor Dwarf, can exhibit complex star formation histories. But as most of these dwarf galaxies' stars have been isolated from each other and have not interacted for billions of years, each collection of stars has charted its own evolutionary course. Studying the similarities in dwarf galaxies' histories, and explaining the occasional outliers, will help to explain the development of all galaxies, from the most unassuming dwarf to the grandest spirals. There is indeed much for astronomers to learn from the Milky Way's shy neighbors.