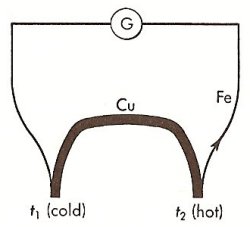 The Seebeck effect is one of three reversible thermoelectric phenomena (often known simply as thermoelectric effects), and the first to be discovered, the others being the Peltier effect and the Thomson effect. The Seebeck effect is named after the German physicist Thomas Seebeck, who, in 1826, published the results of experiments done four years earlier that opened up the new field of thermoelectricity. He observed that an electrical current is present in a series circuit of two dissimilar metals, provided the junctions of the two metals are at different temperatures. This effect is pictured in the diagram. The thermoelectric effect increases as t2 - t1 increases.

Seebeck investigated the thermoelectric properties of a large number of metals and arranged them in a thermoelectric series. When a circuit is formed of two metals in the series, the thermal electromotive force (emf) is greater the further the metals are apart in the series. Also, the direction of the current, at the hot junction, is from the metal occurring earlier in the series to the metal occurring later in it. The following is a selection from Seebeck's series: bismuth (Bi), nickel (Ni), cobalt (Co), palladium (Pd), platinum (Pt), copper (Cu), manganese (Mn), mercury (Hg), lead (Pb), tin (Sn), gold (Au), silver (Ag), zinc (Zn), cadmium (Cd), iron (Fe), antimony (Sb), tellurium (Te). The position of a metal in this series, as Seebeck himself observed, is dependent upon the temperature and also somewhat upon its purity. The thermal emf for the couple Cu and Fe shown in the diagram, although not atypical, is only 1.22 millivolts for t2 - t1 = 100°C.

The Seebeck effect is not independent of, but is rather a combination of, the Peltier and Thomson effects.