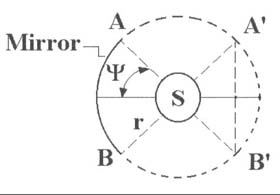 A Shkadov thruster is a hypothetical device built by a Type II Kardashev civilization to control a star's motion. It consists of a mirror of rim angle psi placed at some distance r from a star S (see figure). The mirror causes an asymmetry of stellar radiation in the star-mirror system and, consequently, gives rise to a net thrust on the star. For a certain mirror of superficial mass density, a balance exists between the gravitational force and the force due to star radiation pressure and the mirror-star distance remains constant. It can be shown that, for a well-designed system, the thrust could produce a significant deviation of the Solar System's normal trajectory in the Galaxy.1